After thumbing through several vegan cookbooks tonight, I had decided to make a basic black bean and rice soup. However, as I began collecting ingredients, it morphed into something new, warm, comforting and reminiscent of chicken tortilla soup. 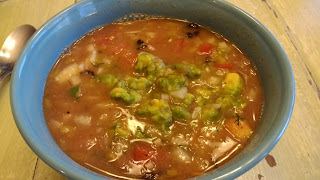 
Add water to large pan and heat to boiling. While water heats, blend tomatoes until smooth. Add tomatoes to water, then add beans, leeks, garlic and spices. Stir to mix.

Scoop several Tbsp. of liquid into a small bowl, then add miso and mix until smooth. Add this mixture back into the large pan and stir.

Place Maseca flour into the small bowl. Add cool water, mixing until it is a thin paste, (similar to the viscosity of honey), adding water as needed.  Once smooth, add a small amount of the tomato liquid mixture (1/2-1 cup) to the Maseca and stir until smooth. Once mixed, add back to the large pan and stir to combine. This will thicken the soup slightly.

Add coconut milk and cilantro, and season to taste.

To serve, place a serving of rice in the bottom of a bowl, add soup and garnish with Pico de gallo, diced avocados, tortilla chips, sour cream and cheese as desired.

*I pressure cooker or slow cool beans and freeze them in 2 cup quantities.