I loved making this stew today. It was made with simple ingredients, all of which I normally have on hand. It used two pots, a knife and cutting board, and came together quickly without a fuss. We loved it over quinoa with hot, crusty sourdough bread. 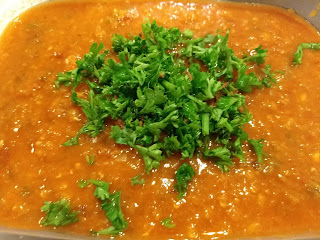 After rinsing lentils, place in a pan with 1 quart water. Bring to a boil.
Once boiling, cover with a lid, and remove from heat. Allow to sit for 20 minutes.
In the meantime, saute celery, onions and garlic in 1-2 Tablespoons of water, until soft.
Add tomatoes, use potato masher or fork to break into smaller chunks.
Add broth, lime juice, aminos, and spices.

Add lentils, then add maple and salt to taste and cook for 20 minutes, stirring occasionally to reduce liquid and blend flavors.

Serve over grain (rice or quinoa), along with hot crusty bread.
Garnish with chopped fresh parsley and ground black pepper.

I have a Blue Jeans pressure cooker cook book and came across this recipe tonight and was pleased with the outcome, after a few twists to make it plant based.
The author states that this is a comfort food from Quebec. I was surprised at how much I liked it-it has a similar, yet lighter taste than the red pepper pasta. 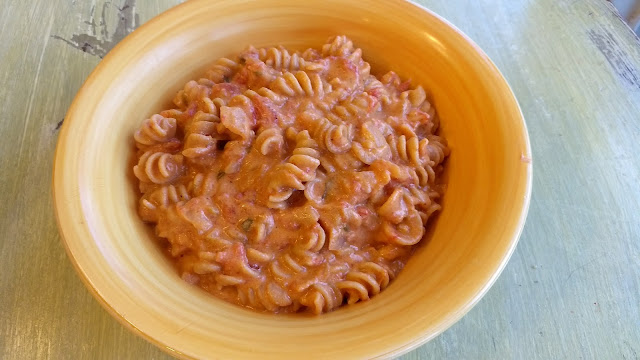 Saute vegetables in 1-2 Tablespoons water until tender.
Add tomato paste, and spices. Stir to mix them in.
Add tomatoes and pasta, and cover and cook for 5 minutes.
Allow to quick release of the steam.

I'm the meantime, blend and, 1 cup of water, add additional garlic, bouillon, and smoked paprika, basil and salt to taste.

Once pasta has cooked, stir in almond mixture and serve..

Here's a super quick, easy, and delicious way to add some oatmeal to your life. 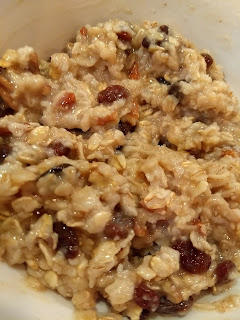 I grew up on oatmeal, and hated (insert many other strong words here) oatmeal. And some people in our house used to save and freeze the leftovers and serve them up later in the week too (bless them for trying to save a penny, but it put me off of oatmeal for years).
Then, several years later, I was at a friend's house and she was headed out the door and said, "just grab some oatmeal for breakfast." She was a tough fire fighting, plane jumping chick, and I was amazed she would eat oatmeal every day. I saw a canister of oats on her counter and was puzzled. I asked how she usually made it, and she shared the following recipe with me.

1 handful oats. (I buy the double box of Quaker oats at Costco-they aren't blended and broken down to bits already) 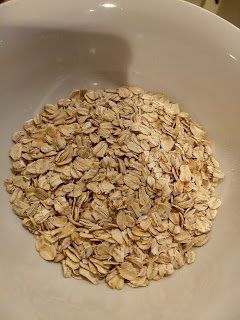 By the way, my handful is approx 1/2 cup. The quantity doesn't matter, but that's the perfect amount that fills me and isn't too much.

Place oats into a microwaveable bowl.
Cover with water, then add 1/8-1/4" more. So it's just over the top. 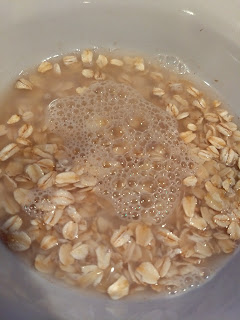 Microwave for 2 minutes.
While it is cooking, crush some nuts, get out some fruit, sweetener (if you need it - I like maple syrup) and a dash of salt.

I like blueberries or raisins usually. Sometimes I add a little nutmeg or cinnamon.

Another option is to smash up one banana in the bottom of a bowl. Add a handful of oats and mix in. Add enough water to cover plus 1/4". Microwave for 2 minutes. Add walnuts and cinnamon and it tastes like banana bread or a muffin. 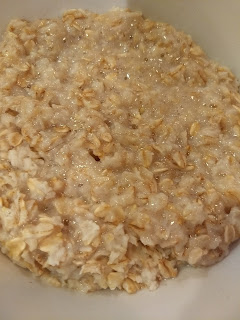 We use plastic cups to send this out the door with our kids in the mornings too! 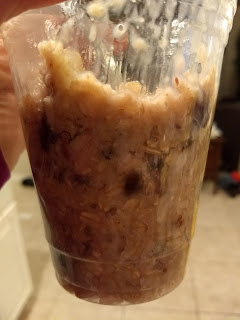 This soup is a perfect all season soup.  It isn't too light or too heavy. Served with crusty bread it is bursting with flavors and ever so satisfying. 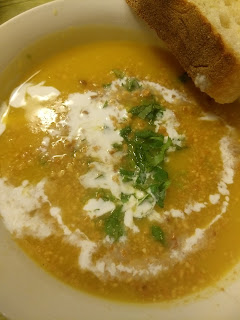